Yext uses Lightstep to identify latency and error issues and then remediate quickly and efficiently. Overall, Yext believes Lightstep is saving its team nearly one week a month of staff time in problem diagnostics.

Microservices allow a distributed system to evolve as a set of independent parts, but a complete, global view of the system is still a requirement to effectively manage a production system. Yext found that the traditional APMsolutions could not provide that full visibility. The team wanted a solution that could trace a transaction end-to-end and be always-on in production, so they could understand the root cause and resolve it quickly. “As the other solutions just record a sample of transactions and traces, we were only getting a partial picture,” said Rob Figueiredo, VP of Engineering at Yext. “In addition, finding these partial records in the system, so we could act on them was extremely difficult.”

Pinpoint the root cause with Lightstep

Lightstep automatically finds and connects related trace data into meaningful stories about an application’s performance, even if the data was produced asynchronously and across distinct service boundaries. Lightstep pinpoints actual instances of notable events such as latency issues and errors. By analyzing 100% of diagnostic data, Lightstep reliably detects one in a million anomalies. It shows everything that happens both upstream and downstream from these issues, including critical paths and logs, providing complete root cause analysis. 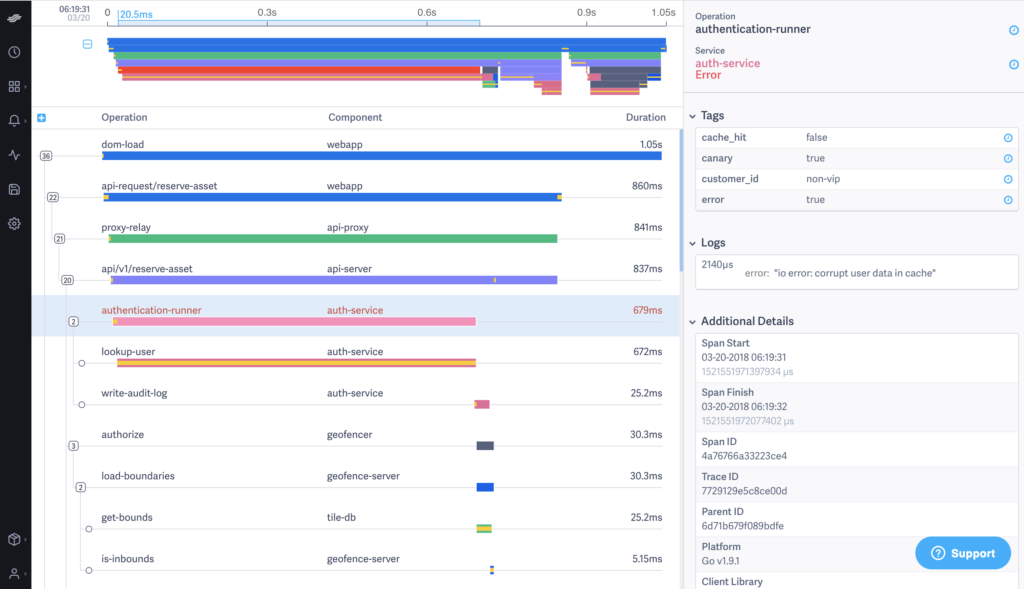 View end-to-end traces from frontend clients down to backend services, and jump straight to errors and bottlenecks

Yext is realizing substantial returns from its deployment of Lightstep, including improved efficiencies for the engineering team. Prior to the deployment of Lightstep, weekly production engineering meetings were time-consuming and inefficient. “We spent a lot of time on detective work, trying to perform root cause analysis on application performance from the prior week,” Figueiredo recalled. “Not only did these problems fester, but we expended a lot of valuable time trying to ascertain the root cause of problems. Our production engineering meetings are now embarrassingly easy. Lightstep is so simple; it tells us about performance problems within seconds, and we’re able to go straight to the root cause in the production system.”